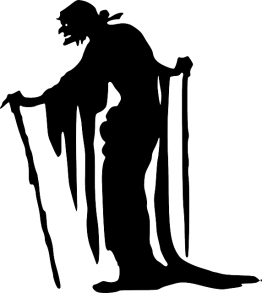 I have said this before: being raised abroad and then in the city made childhood visits to my maternal grandparents quite an adventure. My baby brother and I were treated like royalties and, apart from spoiling us a bit, it also made us feel extremely coddled. Each time the car doors slid open, we would rush into our grandmother’s arms. Then we would look over her shoulders to the well-governed agricultural surrounding and feel even giddier at the prospect of being exposed to so much nature. Not that the adults ever let us stray too far out of their sights. Not that we didn’t give escape a good try anyway and succeed.

Its wooden frames had browned with age and become swollen in places. Most of the exterior walls of the structure had come loose so that we could easily glimpse into its innards through the gaps and see how vacant and lifeless the rooms were. When she moved around in the house – and she was the restless sort – the creaks could be heard all the way across her barren yard to the copse in which my cousins and I hid to watch her.

She was once a wealthy woman with a house full of children. She married into a society with which she apparently was never able to assimilate so she kept mostly to her self and family. She brought up her children with the same social aspirations so that they went abroad to study and did not return. Left alone and betrayed by the children she spent a lifetime serving, she only became a greater recluse with the years. The neighbors had tried many times to fix her roofs or repair the walls of her house (at least the outside ones so the winter wind could be kept out), but she refused to spend a paisa more than necessary for a house her children would inherit nor would she accept assistance complimentary.

All this, of course, was passed along to me by the biggest gossip among my cousins. And since I knew this cousin’s propensity to spin tall tales, I tried to corroborate the information with my grandma. My grandma told me it was all utter rubbish and that my cousins were taking the mickey out of me to prove my city naivete. But my grandma never did get around to tell me what was the truth about the old woman so perhaps if I cut all the corners of the story my cousin told me, I would be closer to the truth than not.

To be fair to the old woman, she was not a witch. I think. To be fair to my child self, the silhouette in the above image is exactly hers. Except, try to fill it in by making her hair white as moonlight and picture her swathed in a plain white cotton sari. Her skin was papery white and just as frail and translucent and sort of hung onto her bones as though it was not buffered by any flesh. And the image featured here is happier than her general disposition was ever known to be.

The only person who was ever allowed to cross the threshold of her yard was a young maid in her late teen. This maid never disclosed anything about her employer to any of the community. My cousin told me she was under a devil’s bind that she had signed with her blood and if she even as much as peeped about anything in the old woman’s household, she would die. I always wondered why the girl would even get herself into such a position – must have had her own grave secret.

We would see the girl flutter around in the yard with about a dozen geese that she would take great care to feed snails and other mollusks. The woman would tend to the four cows in the small barn herself, milking them to maintain her expenditures. Her barn and herd used be one of the biggest in the village in her better days and apparently she still had the means to grow the number of heads but chose not to. She was bent on destroying all sustainability of the ranch for her ungrateful children [also explained by my gossiping cousin]. My strongest memory of this woman is of her walking across the yard to chastise the maid for not feeding the ducks properly before lugging a bale of hay to the barn to feed the cows. Her progress may have been impeded by her slight stoop but neither her verve nor her temper had.

The only person to my personal knowledge to have received a smile, after her children’s dissertation, from this woman was my [then] baby brother. He was pretty cute, like a tiny brown elephant. Not because he was chubby by any standard but because he consumed so much milk and Ceralac, his bones were hella sturdy (even at the age of two he packed a punch to fell my adult uncles, I kid you not).

So one day when we were busy spying on the old woman from our copse, we find that my brother had somehow managed to follow us to the ranch and got into the yard. Finding the ducks roaming idly inside their fenced area, my brother had rushed over. He had never seen ducks before. It was one of the most terrifying moments of my life to see him appear there. I tried to rush to his rescue before he was discovered but my cousin held me back. We would get into more trouble than a baby. I would say what transpired thereafter is pretty legendary.

My brother beat his palm against the metal fence and gurgled his cries to grab the attention of these new creatures that he obviously wanted to befriend. Failing there he found rocks to throw at the ducks, which only bounced back at him. Then he found stray stems of jute (commonly used to fire earthen stoves in the area) and poked it through the diamond openings to immediate success. The ducks quacked in protest to my brother’s sheer delight. What new music was this? He poked, they quacked, he danced. He poked, they quacked, he danced. Until the old woman was upon him.

We were so entertained by my brother’s antics, no one noticed her approach until she was standing next to him. Seeing the new arrival did not daunt my brother’s spirit in the least. He paused only for a moment before resuming to play with the ducks [I doubt though the ducks thought it play]. My brother’s purpose was now to befriend this stranger and the way to do that was to dance. Then having demonstrated his talent, he offered the stick to the woman, pointing to the ducks. She should join him.

The woman took the stick from him and I was about to burst out of hiding to save my brother from a beating that was surely coming when she smiled instead. She smiled her toothless smile and my brother imitated her, followed by peels of giggles and ecstatic clapping. The woman also poked the birds and he danced. She was as delighted with my brother as he was with his new friends.

But miracles have their expirations too. Eventually, the woman called her maid to take my brother back to my grandma’s house. The girl was told to take special care on the way and to ensure my family he was perfectly safe the entire time he was missing. I left my spot to follow my brother home and actually never returned to spy on the woman though my cousin tried to entice me with gorier tales of the woman’s activities. However, I now knew the truth.

The witch would not have eaten my brother and that’s all that mattered.

This entry was posted on April 8, 2017, 12:01 am and is filed under The Unclassified Section. You can follow any responses to this entry through RSS 2.0. You can leave a response, or trackback from your own site.