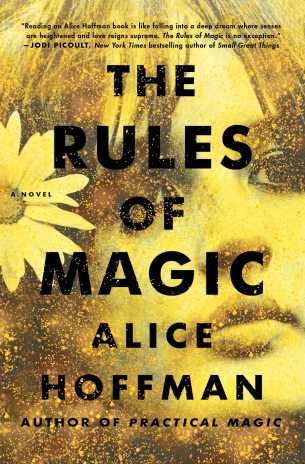 Synopsis: The Owenses are one of the oldest witch families of the New World, their lineage dating back to Maria Owens, who fell in love and had an affair with a married man, John Hathorne, who in order to hide his sins, branded her a witch and tried her during the Salem Witch Trials of 1692. A brokenhearted Maria, then already pregnant with Hathorne’s child, had cursed her own future family to caution them from ever falling in love – a curse that would bring ruin to anyone they fell in love with. For generations, witches of the Owens clan tried to escape the curse, leaving their family home in the little town of Massachusetts to find a “normal life”, as did Susanna Owens. But magic born of blood cannot be eschewed and so Susanna instituted rules to keep her children from discovering their magical heritage. Yet Franny, Jet, and Vincent always knew they were different and, like any other children, they broke all the rules. The eldest Franny was difficult but intelligent and inquisitive; she always thought the fact that birds flocking to her was a curious power to have, but being protective of her siblings, chose to turn a blind eye to her abilities. Jet was the beautiful kind mediator; she could read minds but chose not to reveal what she discovered out of respect for others’ privacy. Vincent, the first male to be born into the family, was heart-stopping handsome and possessed a gift for music; his charismatic ability to cast a lure on others was discovered soon after his birth when a mesmerized nurse had tried to steal him away and he was the first of the siblings to enjoy wielding his powers. However, by the summer Franny turned seventeen, all three Owens children had their turns in experimenting with their abilities. And though they were not aware of any elderly Aunt Isabelle, when Franny and her siblings were called to visit her to learn about magic, they were excited to go. Over the course of the following few months, the siblings come to learn about their family history and power as well as the privileges, responsibilities, and tribulations that come with it. And over the span of the next few decades, the siblings come to learn how everything they learned from Aunt Isabelle was absolutely true.

Experience: I had originally planned to do the review for this novel the Wednesday before Halloween. However, I had just finished reading Elizabeth Gaskell’s North and South at the time and my head was still too full of Margaret and Thornton, so I put off reading Rules of Magic for a couple of days. Then it took me two weeks to finish reading this book – not because it was boring but because it was so languidly mystical.

Despite the topic of the novel, the central theme of the story was truly family and love. If one begins reading the book with expectations of bangs and pops, or potions and spells, one could sift through the entire plot without extracting more than a handful of notes. Rather the magic lay within the dedication Franny placed in ensuring her brother and sister were well taken care of, the undying love Jet possessed in her heart for a man born of the enemy to her bloodline, and the pursuit of self-worth that Vincent ventured upon even as he simultaneously accepted the magic in him while despising the fate his power portend. And through all this, each sibling must come to an understanding with the curse put on their love life and find the grounds upon which they build their own future – but not without plenty of encouragement and protection from each other. The life of magic is not for the faint of heart. The story demanded that it be read with heart and patience because patience is what each of the characters required most to endure all that entailed their inheritance.

The characters were so well developed that it was difficult for me to accept they were not real. It was as though Hoffman truly watched their lives unfold over the decades and were summarizing the events as she remembered them. There were little action or dialogue, the book having been written mostly in exposition, speaking more about how each character interpreted what their magic was and how their experiences with magic confirmed or refuted their original theories. And while this bode that I could not chase through the book in a hurry to reach the end – au contraire it rather slowed me down because there was no opportunity to skip a line lest I miss out on an important thought trail from one of the characters – the passages were by no means prosaic but rather lent the narrative a spiritual quality.

Having both read and seen Practical Magic, I felt Hoffman produced a historical account of the ancestors of Sally and Gillian, the protagonists of the original book. And in the process, quite dispelled the assumptions both the sisters of Practical Magic and I, as a reader, made about the aunts. Whereas in Practical Magic the aunts appeared rather matter-of-fact about their heritage and thought it pointless to shield their wards from the injustice magic rendered upon the family, both personal and social, here, we come to realize how much the aunts concealed about their own lives from Sally and Gillian. Once the girls became their charges, they set aside their past and allowed the girls’ happiness to become the central concern and were more than happy to let them live their lives and discover magic on their own terms without piling their own past fears, disappointments, losses, or even triumphs to overshadow the lives of their wards. While Rules of Magic may be faithfully read as a stand-alone and one need not have read or watched Practical Magic before venturing onto this book, reading Rules of Magic did give me a better understanding of the Frances and Jet in Practical Magic. I cannot help but respect the aunts in the original more for reading about the sisters in the prequel.

As for the “rules of magic”, Hoffman does share many of them – first as instructions and then with the exceptions tot he rules. We are allowed to experience the rules as the siblings (returning to Franny, Jet, and Vincent) successfully break them, come to accept them, and then learn to circumvent them, each playing a cat-and-mouse tango with fate in their turn. It was delicious to watch sisters and brother experiment with the unique power inherited by each as well as the general rules they found in their family grimoire – and even the forbidden texts meant to lead them astray of the course of “not to bring harm”.

Although, I must say few of the witches or wizards in this book cared much for that mother of all rules, harming others and self frequently enough to get out of binds. If anything, I think this was one place where Hoffman could have added a little – including some direct consequences of the magical manipulations the siblings and their aunts rendered would have brought on consistency to the rules. However, all we get to read about is a few blisters from telling uncomfortable lies. Yes, the siblings face their share of hardship but those seem to be unavoidable lessons of their inherent magic rather than the consequences of harms they cause others. Apart from this inconsistency, I think Hoffman wrote yet another masterful tale, weaving together an utterly believable myth.